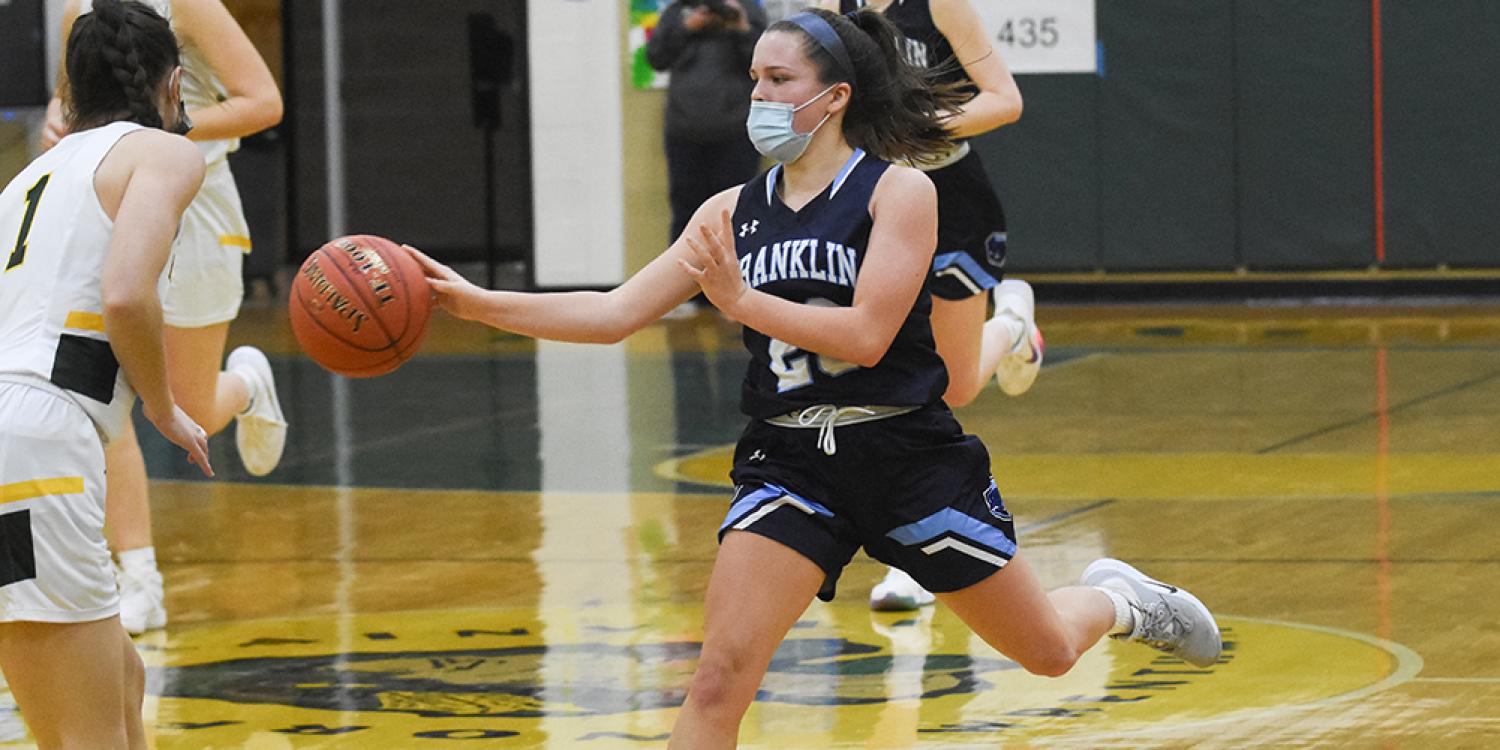 Franklin too much for warriors

FRANKLIN – King Philip Regional High’s basketball teams played powerful Franklin well in the first halves of Sunday’s games, but the Panthers’ boys and girls shook off their doldrums after intermission to post hard-fought Hockomock League victories in both contests.

The King Philip boys enjoyed a 28-27 lead over the unbeaten Panthers after two quarters of the first game, but Franklin outscored the Warriors 25-13 in the third quarter to send the Panthers on to a 70-53 victory.

In the nightcap, the KP girls’ pressuring tactics shocked Franklin in the opening quarter, but a 22-10 second quarter propelled the Panthers to a 62-48 triumph.

But a sign of things to come were the four 3-point baskets in the second period by Franklin senior guard Declan Walmsley. He would add six more points and eight in the fourth quarter for a career-high 29 points.

The Warriors had done a good job of keeping high-scoring forward Andrew Byfield away from the basket in the first half. But the 6-foot-5 senior stepped out of the paint and threw in three treys in the second half.

Walmsley and Byfield (18 points) combined for 14 of Franklin’s 25 third-quarter points as the 4-0 Panthers built a 52-41 lead going into the final quarter. The Panthers connected on 12 3-pointers in the contest.

Danny Clancy, saddled with early foul trouble, scored 12 of his team-high 14 points for the Warriors in the second half. Grant added 10 points, Breen nine and Will Laplante eight for KP (0-4).

Seniors Emma Glaser and Caroline Aaron combined for nine of King Philip’s 11 points in the first quarter of the girls’ game. Aggressive defense, made possible in part by coach Dan Nagle’s “line change” substitution strategy, frustrated the Panthers into several unforced errors in the early going.

But quickly enough, the defending state Division 1 co-champions looked for the open player when KP would commit to double- or triple-teaming the ball. Junior Olivia Quinn, one of the Hockomock League’s top players, was the player found open most frequently; she scored four undefended baskets in the paint to help Franklin build a 33-22 lead by halftime.

Quinn and sophomore forward Katie Patterson maintained the momentum for Franklin (4-0) in an 18-11 third quarter.

Quinn finished with a game-high 22 points, and Patterson and Brigid Earley added 10 apiece for Franklin.

Aaron paced KP (1-3) with 11 points and Courtney Keswick added 10, including three treys. In all, the Warriors connected on nine 3-pointers.

Both Warrior teams return to action this week, the boys at Milford on Tuesday (7 p.m.), and the girls at Milford in Thursday (7 p.m.). The Scarlet Hawks will visit Wrentham for a boys-girls doubleheader on Sunday.