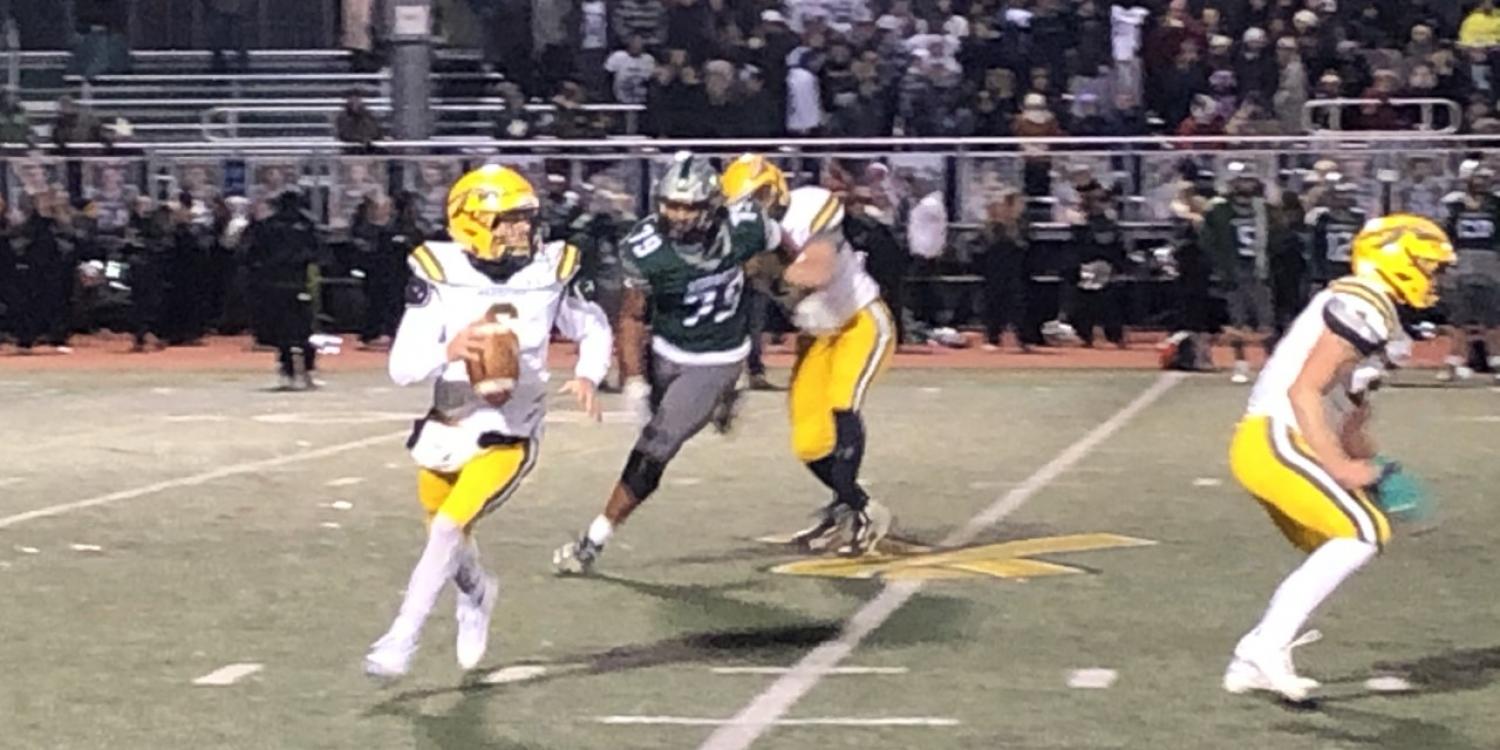 MANSFIELD -- There was no other way for Brian Lee to describe it.

“We just got our butt kicked, you know what I mean,” said the 15th-year King Philip Regional High School football coach after his defending MIAA Division 2-South champions were eliminated from this year’s postseason tournament, losing 34-6 to a relentless Mansfield squad Friday at Alumni Field.

The loss eliminated the possibility of the Warriors appearing in their fourth consecutive MIAA Super Bowl.

Having defeated KP by a two-point margin (15-13) at Macktaz Field in their league matchup on Oct. 4, the Hockomock Kelley-Rex champion Hornets learned a valuable lesson from that slim victory -- and that was to keep close tabs on KP senior quarterback Robbie Jarest.

“Pressure him, make him throw in a hurry, don’t let him get to the edge,” Mansfield coach Mike Redding said. “The big focus tonight was not letting him get comfortable. Obviously we were worried about Ryan Halliday, but the key was to pressure the QB, don’t let him set his feet, don’t let him run around and make plays, because he almost led the comeback last year against us (in the playoffs) and he drove us crazy the first time this year.”

Jarest completed just seven of 23 passes, with one interception, for 111 yards and a touchdown. But he was also dropped for losses four times for 29 yards, and was relentlessly pursued by Mansfield pass-rushers T.J. Guy and Chris Graham.

Halliday, in just his second game back after a three-game absence due to a broken thumb, carried 13 times for 42 yards -- but had just 12 yards on seven carries at intermission.

“Even when we had a chance, we just didn’t play the way we were supposed to,” Lee said. “Then it got out of hand and we got one-dimensional. And it goes from there.”

Mansfield, meanwhile, unleashed a devastating passing attack against a KP secondary that had played well all season long.

Senior quarterback Jack Moussette completed 11 of 16 passes, with two interceptions, for 227 yards and four touchdown passes. Three of the TD catches were by junior Cincere Gill, who caught five balls for 106 yards and added an 11-yard touchdown run for good measure.

“Anybody in the high school covering Cincere is a bad matchup,” Redding said. “We haven’t thrown a lot to him, but we felt coming in tonight that he might be as valuable catching the ball as he was running it.”

Mansfield appeared headed for its first score on its second possession of the game, but KP’s Brian Wassersug put an end to that with an interception in the end zone. But after Graham’s 15-yard sack of Jarest stopped the next KP possession, Mansfield took over at its own 49 and didn’t wait much longer to gain the upper hand.

A 33-yard pass to Dan Rapoza on the first play brought the Hornets into the KP red zone, and four plays later, on the first play of the second quarter, Moussette found the swift Gill from the KP 9 for the game’s first TD. Mike DeBolt added the first of his four conversion kicks.

Jarest suffered consecutive losses of 5, 2 and 6 yards on the next ill-fated KP possession, and Mansfield took over after the punt on the Warriors’ 46. On the first play, Gill had the field wide open after Wassersug slipped and fell in coverage, and the easy touchdown made it 14-0 in Mansfield’s favor with 9:19 left in the half.

Mansfield made it 21-0 the next time it touched the ball, driving 68 yards in six plays and scoring on an 18-yard screen pass from Moussette to tight end Everett Knowlton with 3:41 left. Another Mansfield scoring bid before halftime was thwarted by Moussette’s second end-zone pick, this one by Crawford Cantave.

Mansfield’s Nick Marciano intercepted Jarest on the fourth play of the second half, starting Mansfield’s next possession at the KP 23. After three runs by senior Vinnie Holmes (11 carries, 69 yards), Gill went around left end from 11 yards out for the 28-0 lead.

The Warriors responded with a solid scoring drive, going 84 yards in eight plays, including a 42-yard sideline toss to Alex Behling (three catches, 62 yards) that set up their only score. Typical of the evening, even that didn’t come easily -- Jarest’s throw from 19 yards out caromed off the hands of tight end Drew Danson in the end zone, but Andrew McKinney was in the vicinity and pulled in the deflection with 4:14 left in the third quarter.

Mansfield finished the scoring on a 23-yard TD pass to Gill exactly a minute later. Then the Hornets made sure there would be no miracle comeback when they held the ball for 7:27 on a scoreless fourth-quarter possession.

The Hornets advance to a sectional final Friday at top-seeded Natick, a 30-0 victor over Wellesley in Friday’s other semifinal. King Philip, meanwhile, will await a non-playoff pairing to be announced on Sunday.